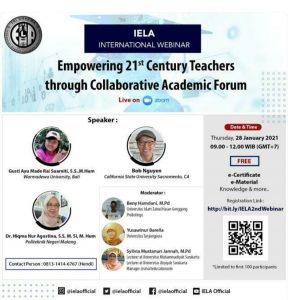 Approximately five hundred English language and literature teachers from Indonesia and overseas have participated in IELA 2nd International Webinar. The event was held on the Zoom platform and also streamed via the IELA YouTube channel. The event highlighted a collaborative academic forum to empower 21st-century teachers.  Keynote speaker Bob Nguyen from California State University kicked off the webinar with his talk about Online Community Building Activities in the Virtual Classroom. He introduced some online activities that teachers could use to enhance more interaction in the virtual classroom. Following the presentation by Dr. Hiqma Nur Agustina, S.S., M. Si., M.Hum from  Politeknik Negeri Malang, she underpinned women’s voices in literary work. Some of the research results that raise novels by the writer of the Afghan diaspora that she has done focus on gender injustice, repression, discrimination, and a very strong patriarchal culture. Through work, the voice of women is echoed by the writer to bring out the care and empathy of many other women. Readers and researchers who are interested in researching Middle Eastern literature can read some articles that have been generated by Hiqma. The webinar was concluded by Gusti Ayu Made Rai Suarniti, S.S., M. Hum from Universitas Warmadewa, who underlined analysis of fiction through its elements. Several important elements which build work are used when researching a literary work. She presents some of these important elements in her presentation. Readers understand the content of the story through characterizations, themes, messages, tones, and several other story-building aspects. Husnul Khotimah, M.Pd, from IAIN Langsa as the steering committee chair said that this international webinar aims to create a space to collaborate and work together in conducting the Three Pillars of Higher Education, namely teaching research and community service.

Dr. Daniel Ginting, President of IELA, hopes that the implementation of the second IELA webinar can become a forum for English language teaching lecturers in Indonesia in particular and other lecturers, in general, to increase collaboration in teaching, research, and community service so that discussion space can be created and can simultaneously together become world-class active scholars.